I spotted a Bee on the Marjoram this morning. It had collected so much pale yellow pollen it could hardly fly off.

Bee on the Marjoram

More sorting today and a great deal of pleasure! I found school reports for two pupils from many years ago, both of whom I thought might well have a career in writing so I saved their reports to be able to say later, “I used to teach this young man/young woman!”   I managed to track down one of them and we had a delightful conversation about his career so far. It pleases me so much to hear from ex-pupils and to hear their enthusiasm. His report contained phrases such as, ‘S has an enviable talent for original writing,’ ‘an intuitive feel for language,’ and ‘S writes fluently with imagination and skill.’  Plenty of time yet to fulfil his dreams.

Among my treasures to sort is this sand dollar which we picked up  over 30 years on our first visit to America to see my brother and we discovered the delicacy of sand-dollars on the beach near Savannah. Isn’t it beautiful?

Sunny but windy and cool this evening so not many people on the beach. Those who were there were having fun – running away from waves, splashing in pools, building sand castles, watching seagulls and admiring the most amazing clouds. On the way home there was a splash of rainbow in the sky. Click on any photo for a better view. 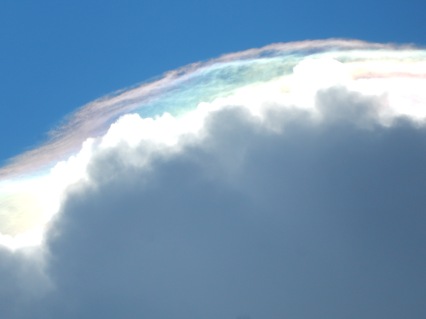 Close up of Beautiful clouds

Squealing and running away from the incoming waves 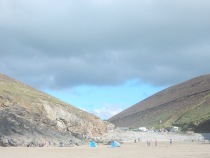 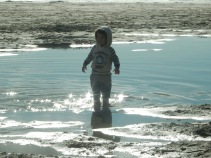 Sparkles in the pool

A pair of Sea gulls 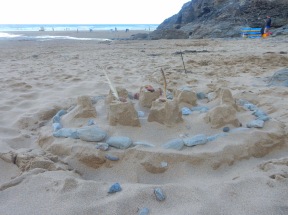 Tags: fun at the beach

The post today brought us an update on the seven year old girl we are sponsoring in Senegal. It is always a delight to hear from the family. I love the tree A has drawn for us.

Letter from A sponsored through PLAN

I have cleaned and re-hung all my favourite earrings today. It is lovely to remember where I bought each pair or the person who gave them to me.

Earrings from all over the world

Supper tonight, Creamy Courgette and Tarragon Cobbler, is from a new Yotam Ottolenghi recipe in today’s Guardian. The photo is from the magazine as our dish is still in the oven! 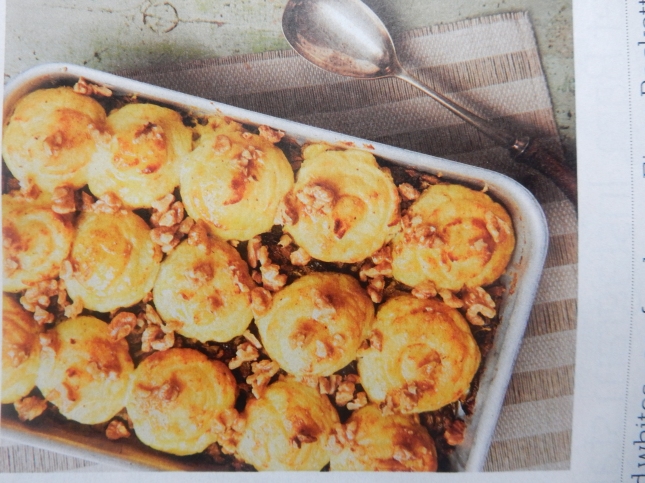 P.S. Well, that was delicious! I used almonds instead of walnuts and cut the ingredients to suit two rather than six, served it with broccoli and we have just finished a most scrumptious veggie supper! 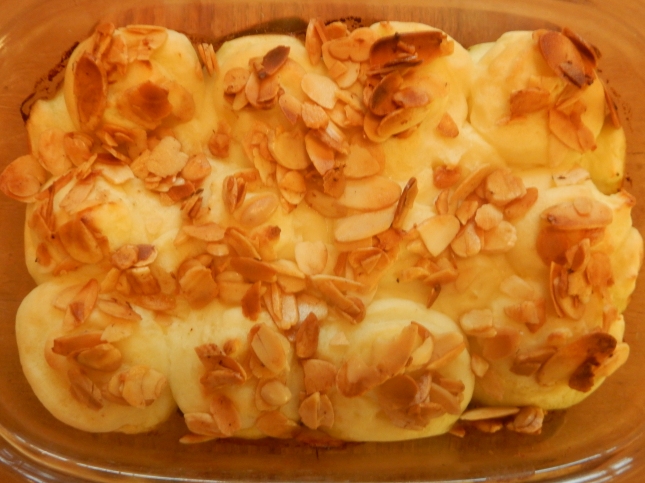 Posted by mybeautfulthings on July 29, 2017 in Beauty, Food, Photography, postaday2017

Rain, A Ring and A Flower

It has rained all day again and the garden is quite sodden. I like the muted effect through the rain-splattered window.

My Wedding ring has been too small for me for some time and I wear it on a chain. Today we went to a local family jewellers and found a beautiful silver ring with a Celtic knot design and I have a new ring on my wedding finger, just in time for our Golden Wedding Anniversary next month.

From the flowers we were given last week, this one is pink and fluffy but I don’t know its name. 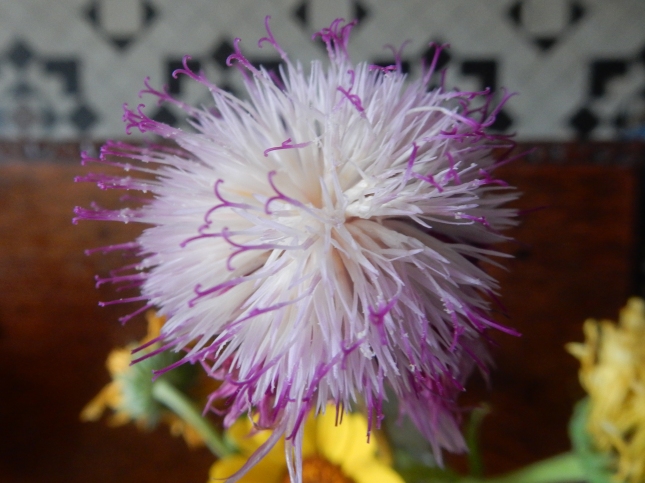 What is this pretty flower?

Sunflower, Magpies and A Poem

We were given a lovely bunch of Sunflowers on Sunday and they are still gorgeous though dropping their bright yellow pollen. 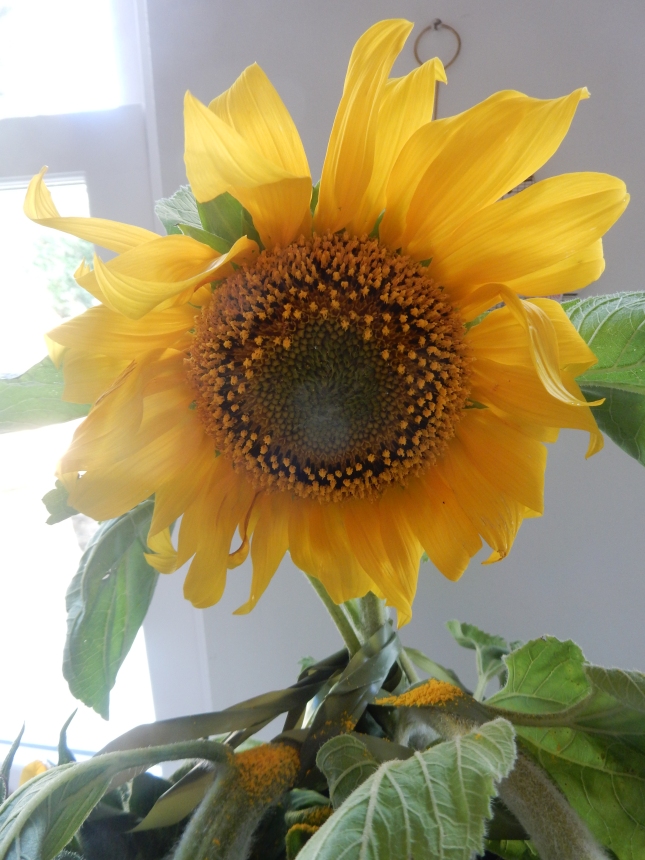 We have a family of Magpies in the garden but they are very skittish and I cannot get a photo of them all together. I’ll keep trying! There are six altogether, two parents and four very demanding youngsters. Six is good as the old nursery rhyme tells us:

One for Sorrow
Two for joy
Three for a girl
Four for a boy
Five for silver
Six for gold
Seven for a secret never to be told
Eight for a wish
Nine for a kiss
Ten a surprise you should be careful not to miss
Eleven for health
Twelve for wealth
Thirteen beware it’s the devil himself.

A good friend sent me the following poem a couple of days ago. It is a gentle evocation of a beautiful place, written by Edwin Waugh in 1864.

‘Tis sweet in pleasant Silverdale,
All in the blossom-tide,
To watch the hardy fishers sail
O’er the blue waters glide.

There, changeful ocean’s
Murmuring waves
Sing in the smiling lea;
A paradise upon the land,
And wonders in the sea.

I looked him up as his work is new to me and found the following on Wikipedia. There is more to be found here.

“The son of a shoemaker, Waugh was born in Rochdale, Lancashire, England and, after some schooling, was apprenticed to a printer, Thomas Holden, at the age of 12. While still a young man he worked as a journeyman printer, travelling all over Britain, but eventually returned to his old job in Rochdale.[1]

Waugh read eagerly, and in 1847 became assistant secretary to the Lancashire Public School Association and went to work in Manchester. By 1860 he was able to become a full-time writer; but in 1881 he was in poor health and was granted a Civil List pension of £90 p.a.”

Perun, the 6 m high Slavic Thunder God next door, is being dismantled for his journey to Slovakia. I love how his hair is flowing in the wind! You can read more about him here.

When I die
Give what’s left of me away
To children
And old men that wait to die.

And if you need to cry,
Cry for your brother
Walking the street beside you
And when you need me,
Put your arms
Around anyone
And give to them
What you need to give to me.

I want to leave you something,
Something better
Than words
Or sounds.

Look for me
In the people I’ve known
Or loved,
And if you cannot give me away,
At least let me live in your eyes
And not on your mind.

You can love me most
By letting
Hands touch hands
By letting
Bodies touch bodies
And by letting go
Of children
That need to be free.

Love doesn’t die,
People do.
So, when all that’s left of me
Is love,
Give me away

The Cornish Studies Library in Redruth now has our Perthi Kov Exhibition of the people we researched for  ‘Until the Day Break’, all  put together by Lesley Trotter and me and designed by Anna Oliver. It looks good in this venue! If you are local, go in and have a look. If you are from somewhere else in the world, please click on the photo to be able to read about our fascinating characters. 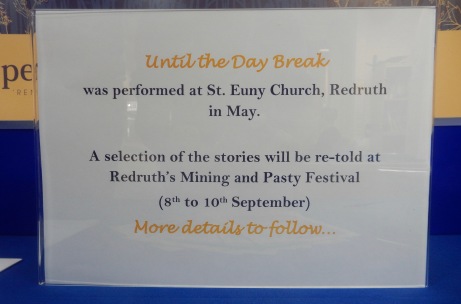 Eight of our characters

Bees and butterflies are enjoying our Agapanthus flowers as are we. 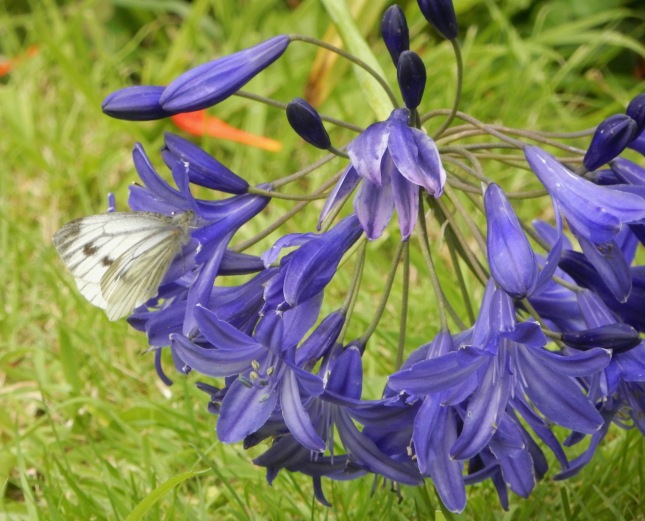 Masts in the Sunset

We are just in from a beautiful evening with both my choirs – a boat trip from Falmouth to St Mawes where we sang joyfully to passers-by and then came back, singing all the way.

Coming back into Falmouth

Here is a gallery of photos from last Monday when Mydd and Josh celebrated their marriage at Godrevy Beach, Cornwall. Click on any photo for detail. It was a day so full of love that it was tangible. The air was alive with love and laughter, smiles and serenity. May their life together be long and happy and full of beauty. 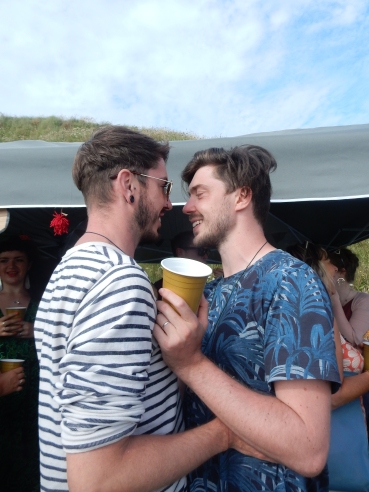 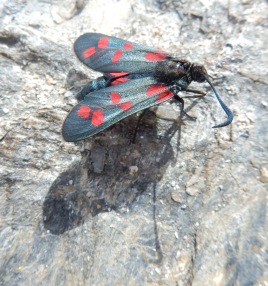 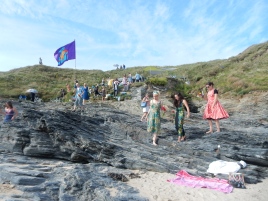 All coming down to the beach for the Ceremony

Marquee full of food and drink

We’re on our way down! 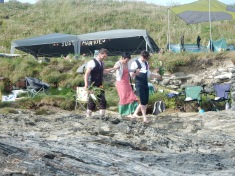 Coming down onto the beach 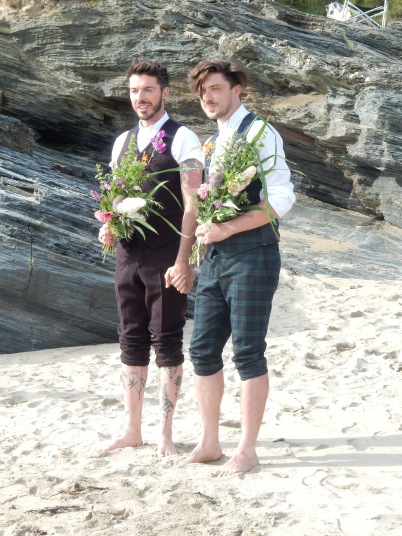 Waiting for the Ceremony to begin

Now we have our garlands, we can begin 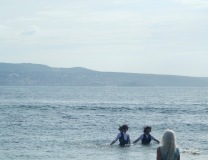 Many guests in the water too

Coming out of the water 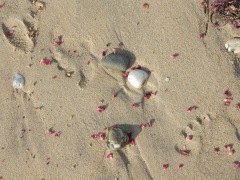 Rose petal confetti on the beach 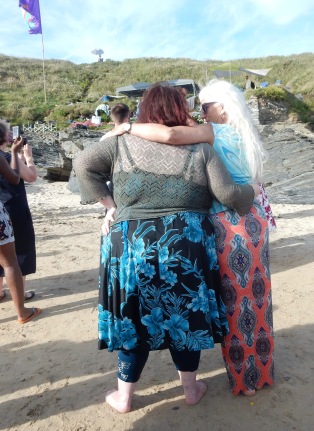 Coming back from their first swim

Special pot shards for the guests 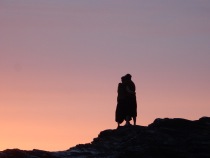 Sunset ending the best day ever!

An evening ride in late sunshine to Chapelporth was a delight. We were able to get close to this Buzzard on a telegraph pole.

On a telegraph pole

It was high tide and the waves were crashing satisfyingly against the rocks. 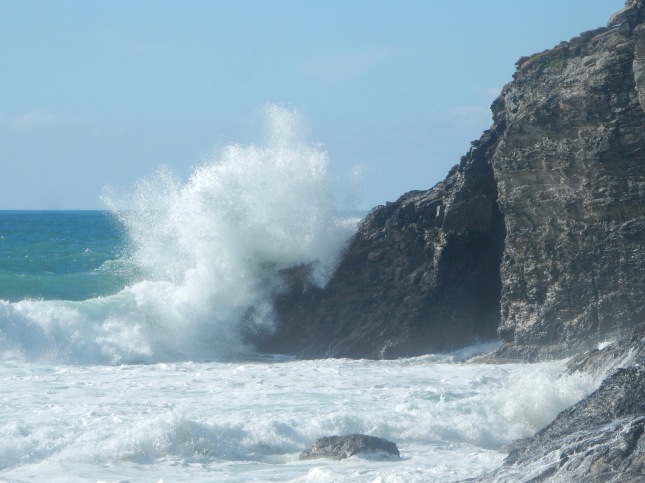 A VW camper van came into the car park for a few moments and had some of (?) Lewis Carroll’s words on the side.

On the side of a camper-van

In fact the lines are not from Alice in Wonderland though the sentiment is when the Cheshire Cat has a conversation with  Alice:

‘Cheshire Puss,’ she began, rather timidly, as she did not at all know whether it would like the name: however, it only grinned a little wider. ‘Come, it’s pleased so far,’ thought Alice, and she went on. ‘Would you tell me, please, which way I ought to go from here?’

‘That depends a good deal on where you want to get to,’ said the Cat.

‘Then it doesn’t matter which way you go,’ said the Cat.

‘….. so long as I get somewhere,’ Alice added as an explanation.

The words are, of course, George Harrison’s in his composition, Any Road. Listen here!

Isn’t that a delight?  I like the next one too, All Things Pass.  Over to you, Dear Reader.