A Woodpecker, Singing and An Olive

A woodpecker has been visiting our bird feeders.

Zoom singing with The Suitcase Singers this morning was joyful and a tonic. I would share one of the three screen shots but all the names were there. What a wonderful community of singers we are!

We have one olive on our tree!

Posted by mybeautfulthings on May 21, 2020 in community, nature, Photography, Postaday2020, Uncategorized

Glass all day ready for the market tomorrow – I now have a beautiful choir of angels – and then, this evening, I went singing with my beautiful choirs at Krowji for the start of the Christmas season. We can only sing in groups of ten so that we don’t block the corridors for all the people who have come to visit the artists’ studios. It’s quite a challenge with only two or three in each part.

Posted by mybeautfulthings on November 29, 2019 in Photography, Postaday 2019

The Suitcase Singers went by train all the way to Saltash Regatta & Waterside Festival 2019 today to sing in the glorious sunshine, the highlight of the day being singing ‘Ann Glanville’ around her statue. It was a brilliant day out, singing our hearts out and interestingly,  being underneath the Brunel Bridge for a change!

The Suitcase Singers with Ann Glanville about whom our lovely Claire, choir leader, has written a song

View of the bridge from up the hill

It’s Father’s Day here in the UK and so breakfast was the lovely Mr S’s favourite, French Toast with Summer Fruits, Creme Fraiche and Maple Syrup.

It’s been the Falmouth Shanty Festival this weekend and my choir was singing.  There are shanty singers around every corner and in every venue throughout the weekend. It is enormous fun.

My choir, The Suitcase Singers, at the Shanty Festival

We went to watch The Jolly Strumpets in which a friend sings and then Femmes de la Mer, run by my choir leader and with many of my friends singing. They are brilliant.

Bunting in the streets

Fabulous concert and Cornish Cream Tea this afternoon with The Suitcase Singers, singing our hearts out and raising money for our two charities, ShelterBox and The Invictus Trust.

The view across to Flushing from that side of the river is so very lovely and there were swans on the water.

Last night’s full moon was gorgeous, seen through the trees and with an orange glow all around.

Dad’s Book, Singing and A Discovery

A delightful surprise today when a friend rang to say that she had seen a poster for a musical play of one of my Dad’s books! The Fate of Jeremy Visick is to be performed in a couple of weeks and of course, we now have tickets. The book was first adapted by Judith Cook and we all came down from Yorkshire to see the Premiere at The Barbican Theatre in Plymouth in 1990! It is so lovely to know that my Dad’s work is still being appreciated. We love the poster and think Dad would have approved.

Stage Struck and The Fate of Jeremy Visick

Thirteen singers from my two choirs met at the building site that is The Hall for Cornwall to entertain the dignitaries who were being shown around. We sang in the stair-well and the acoustics were brilliant. The audience in their hard hats and hi-vis jackets were very appreciative.

In the process of the building works, a beautiful gate has been discovered. It was buried inside a wall and dates from before 1914 so is well over 100 years old.  The plans have been altered a little to make sure this discovery is integrated into the new building.

The show by  Yskynna started yesterday and I was part of it today – three 20 minute shows a day and free for anyone already in the National Maritime Museum in Falmouth. If you live nearby and have children to entertain this half term, the museum is fabulous and the production a treat!

After the second show, we went out busking for a while, collecting for our charities – ShelterBox and St Petroc’s.

Some of The Suitcase Singers singing Lower Lights

On our walk later on, we found lots of spiny casings from the Sweet Chestnut tree.

The Rosemary is still very blue and lovely with some seed pods poking through.

The dew stayed on the Kale all day.

I’ve been with The Suitcase Singers tonight at The Maritime Museum rehearsing for a production called Ghost Ships which is going to be playing all the half term holiday next week. I’ll tell you more as the week goes on.

In the Maritime Museum, Falmouth

Posted by mybeautfulthings on October 16, 2018 in Cornwall, Photography

St Piran’s Day, Singing and Marching for Our NHS

St Piran’s day is tomorrow and there have been parades all over Cornwall today. In Redruth, the rain held off just for the duration of the parade. The theme is both St Piran represented by his flag, black with a white cross,  and daffodils. Every local school takes part and the whole event is one of joy.

The start of the Parade with Redruth’s mascot, Tolgus the Lamb leading. 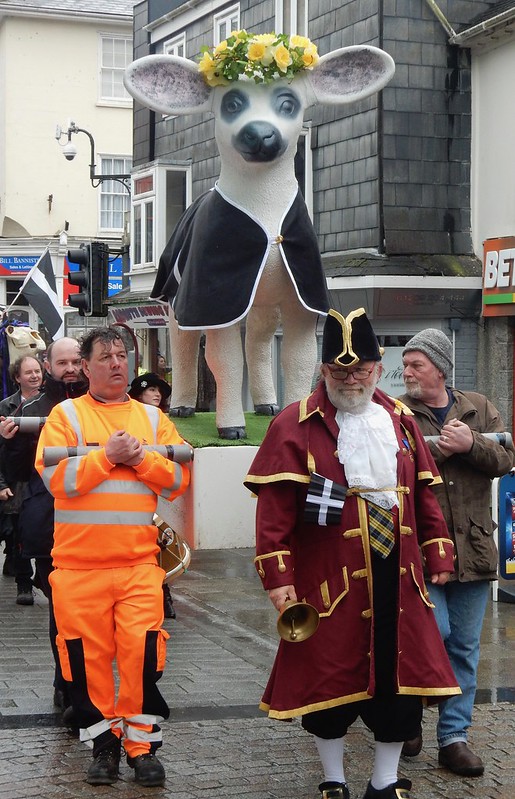 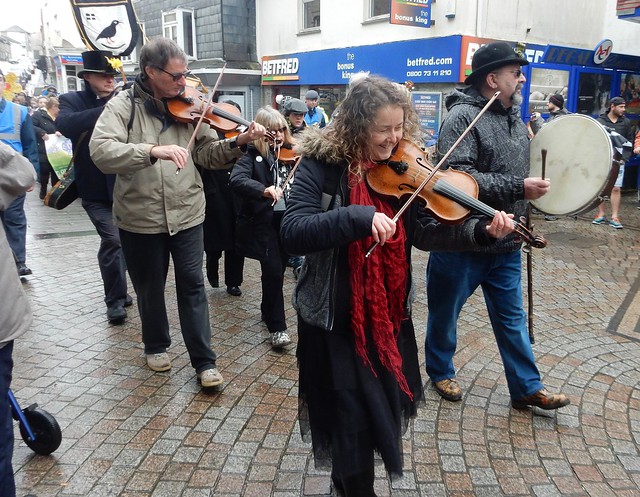 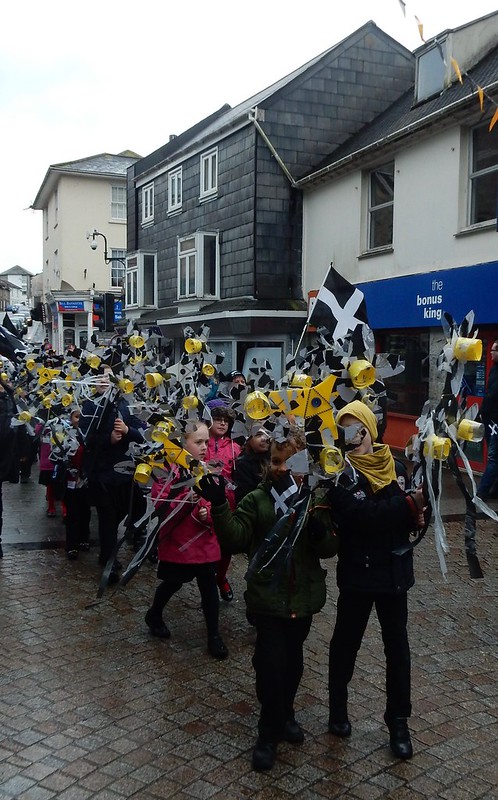 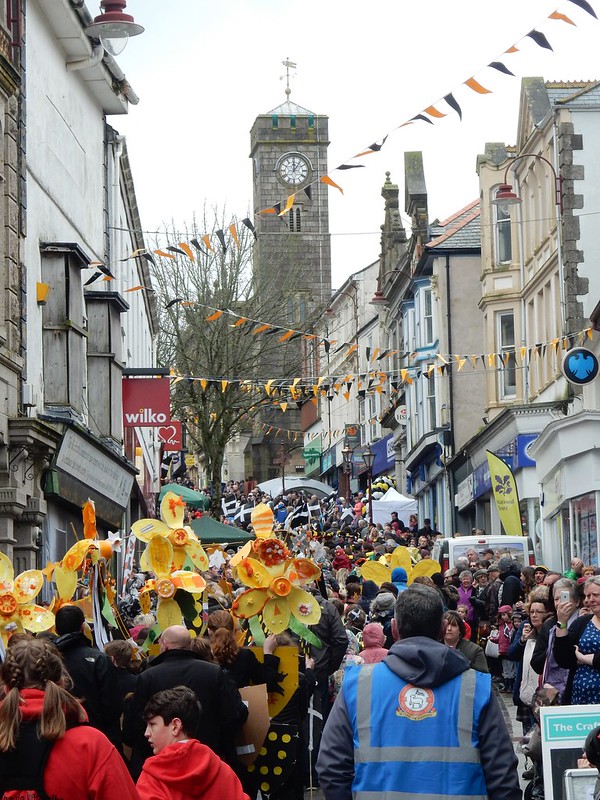 As part of the celebrations, my choir had been asked to sing Cornish songs and though the audience was quite small they were very enthusiastic. 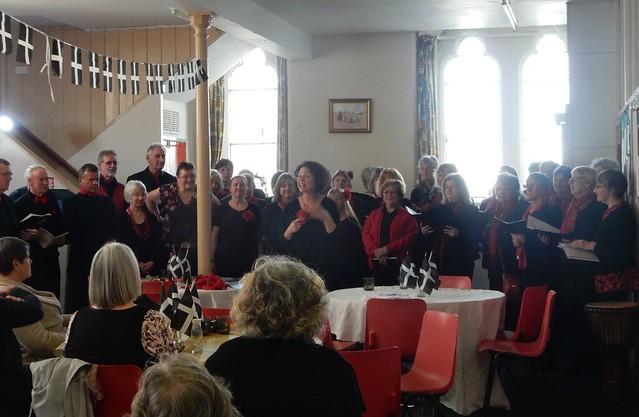 I had to leave the performance early to catch the train to Truro, a train it turned out, which was full of people coming up from Penzance to the Save Our NHS March. There were tens of thousands marching in London and several hundred of us in Truro. This photo was taken at the end as the crowd is beginning to leave. 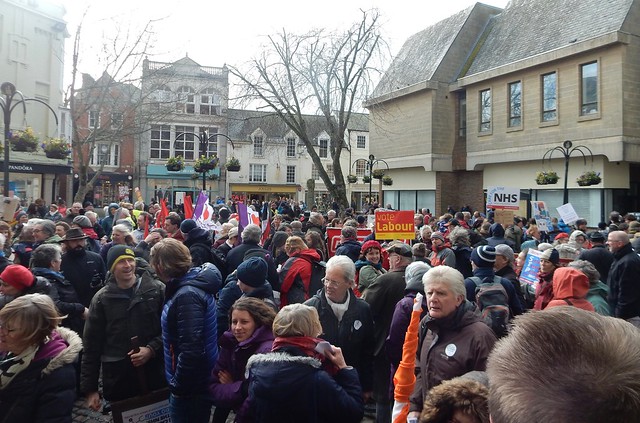 Love, Bosses and A Warmup

The world is in such great need of love – we can each do our bit and be willing to practise.

This evening my choirs have sung in a very beautiful building, The Alverton Hotel in Truro which was a convent in a previous life. I loved the bosses on the ceiling.

We did our warmup in The Great Hall, another beautiful room.

Posted by mybeautfulthings on December 15, 2016 in architecture, Beauty