Snow! Centenary and A Song

We woke to snow! What a treat for us here in Cornwall and it was all gone by lunchtime. Click on any photo for a wider view. 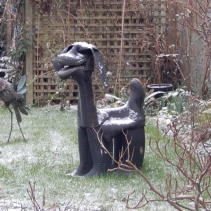 Welly dog in the snow 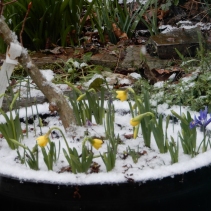 Spring flowers in the snow 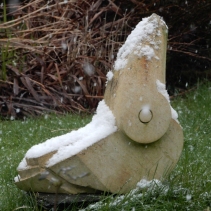 Fledgling in the snow

Today is the Centenary of Women’s Suffrage, 100th anniversary of the Representation of the People Act 1918. It was legislation that enabled all men and some women over the age of 30 to vote for the first time and paved the way for universal suffrage 10 years later. I have been publishing Suffragette Diary as my contribution to the Cause. Today has brought some special news and a song.

In my post yesterday, I shared my research which had led me to think that the anonymous Suffragette was, in fact, Gladys Roberts.  To my delight, that has been confirmed today by a researcher friend. Thank you, Lesley . And that is not all……

Lesley has also discovered information about my Great Granny, Mrs Wiseman, whom we knew had been force fed in Holloway for which she received the Holloway Brooch but we knew no more.   Now we know what Mary Wiseman did. At 53, she was an activist in Manchester and joined several other women in London in an attempt to present a petition to the Prime Minister. When the police tried to prevent the women, they ‘obstructed’ and some hit the police. For this they were arrested, taken to the Magistrate’s court and imprisoned.  One of the cuttings mentions Winston Churchill watching from behind the railings!

Newspaper image ©The British Library Board. All rights reserved. With thanks to The British Newspaper Archive (www.britishnewspaperarchive.co.uk

I had a message as I started to transcribe the Diary from a songwriter who wanted to use it in creating a song about Suffragettes. ‘Of course,’ I said  and here is the song, many phrases of which you will recognise if you have read the Diary. Thank you, Matt, it’s brilliant!  https://museumsongwriter.wordpress.com/the-songs/

6 responses to “Snow! Centenary and A Song”

This site uses Akismet to reduce spam. Learn how your comment data is processed.